See below for information on running these notebooks in a live computing environment. Or just take them for a spin using Binder.

Notebooks in this section look at the Trove newspaper corpus as a whole, to try and understand what's there, and what's not. 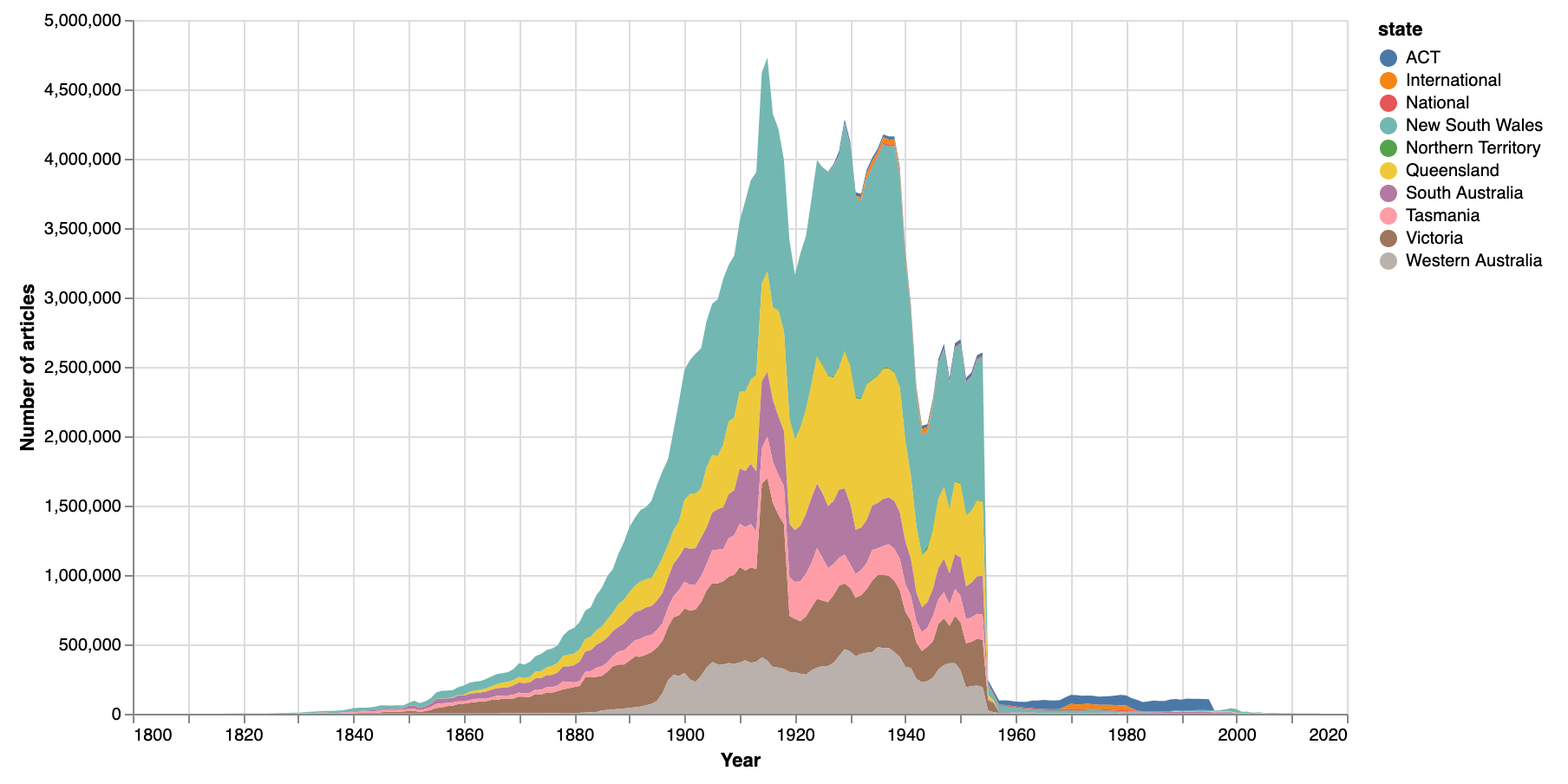 The full text of newspaper articles in Trove is extracted from page images using Optical Character Recognition (OCR). The accuracy of the OCR process is influenced by a range of factors including the font and the quality of the images. Many errors slip through. Volunteers have done a remarkable job in correcting these errors, but it's a huge task. This notebook explores the scale of OCR correction in Trove.

Beyond the copyright cliff of death¶

Most of the newspaper articles on Trove were published before 1955, but there are some from the later period. Let's find out how many, and which newspapers they were published in.

Gathering historical data about the addition of newspaper titles to Trove¶

The number of digitised newspapers available through Trove has increased dramatically since 2009. Understanding when newspapers were added is important for historiographical purposes, but there's no data about this available directly from Trove. This notebook uses web archives to extract lists of newspapers in Trove over time, and chart Trove's development.

Notebooks in this section demonstrate some ways of visualising searches in Trove newspapers – seeing everything rather than just a list of search results.

This is the latest iteration of QueryPic with many new features. Use it to visualise searches in Trove's newspapers and gazettes, aggregating the number of results by day, month, or year. Simply copy and paste a url from a Trove web search to get started. QueryPic's charts help you explore patterns and trends, and if you find something interesting you can click on a point to view the results in Trove for that time period.

QueryPic is a tool I created many years ago to visualise searches in Trove's digitised newspapers. It shows you the number of articles each year that match your query — instead of a page of search results, you see the complete result set. This is an older version of QueryPic that lets you build queries using keywords, states, or newspapers. 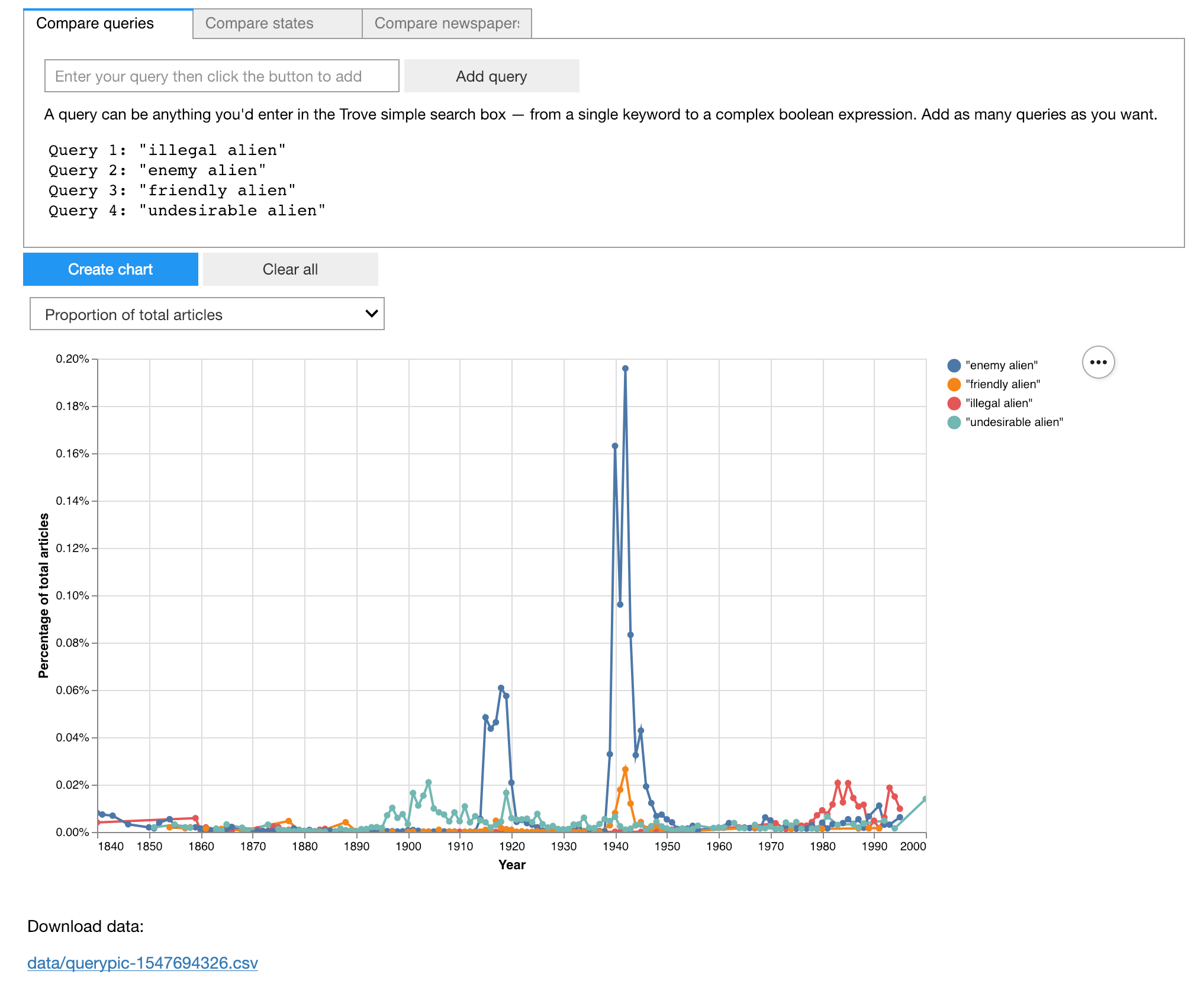 This notebook helps you zoom out and explore how the number of Trove newspaper articles in your search results varies over time by using the decade and year facets. We then combine this approach with other search facets to see how we can slice a set of results up in different ways to investigate historical changes.

Uses the Trove state facet to create a choropleth map that visualises the number of search results per state.

Uses the Trove title facet to find the number of results per newspaper, then merges the results with a dataset of geolocated newspapers to map where articles were published. 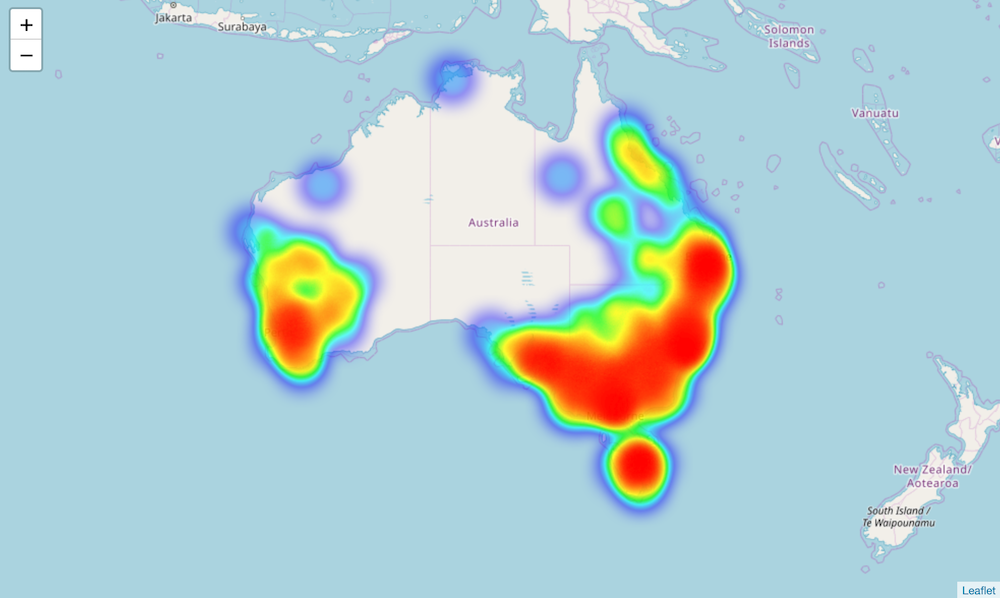 Map Trove newspaper results by place of publication over time¶

Adds a time dimension to the examples in the previous notebook to create an animated heatmap.

Notebooks in this section provide useful tools that extend or enhance the Trove web interface and API.

Save a Trove newspaper article as an image¶

Sometimes you want to be able to save a Trove newspaper article as an image. Unfortunately, the Trove web interface doesn't make this easy. The 'Download JPG' option actually loads an HTML page, and while you could individually save the images embedded in the HTML page, often articles are sliced up in ways that make the whole thing hard to read and use. This notebook grabs the page on which an article was published, and then crops the page image to the boundaries of the article. The result is a complete, intact image which presents the article as it was originally published. And if the article is split across multiple pages, you'll get one image per page.

Generate a nice square thumbnail image for a newspaper article.

This notebook steps through the process of uploading Trove newspaper articles to your own Omeka-S instance via the API. As well as uploading the article metadata, it attaches image(s) and PDFs of the articles, and creates a linked record for the publishing newspaper. The source of the articles can be a Trove search, a Trove list, a Zotero collection, or just a list of article ids.

Somewhat confusingly, the Australian Women's Weekly is in with Trove's digitised newspapers and not the rest of the magazines. There are notebooks in the GLAM Workbench's journals section to help harvest all of a journal's covers as images, so I thought I should do the same for the Weekly. This notebook can be easily adjusted to download the front pages of any digitised newspaper.

Notebooks in this section provide some useful hints to use with the Trove API.

Uses the date index and the firstpageseq parameter to find articles from exactly 100 years ago that were published on the front page. It then selects one of the articles at random and downloads and displays an image of the front page.

Uses the has:corrections parameter to get the total number of newspaper articles with OCR corrections, then displays the results, updating every five seconds.

Get a list of Trove newspapers that doesn't include government gazettes¶

Get the page coordinates of a digitised newspaper article from Trove¶

This notebook demonstrates how to find the coordinates of a newspaper article on a digitised page.

Notebooks in this section look at ways you can use data from Trove newspapers in creative ways.

This notebook starts with a search in Trove's newspapers. It uses the Trove API to work its way through the search results. For each article it creates a thumbnail image using the code from this notebook. Once this first stage is finished, you have a directory full of lots of thumbnails. The next stage takes all those thumbnails and pastes them one by one into a BIG image to create a composite, or mosaic.

When you search for a term in Trove's digitised newspapers and click on individual article, you'll see your search terms are highlighted. If you look at the code you'll see the highlighted box around the word includes its page coordinates. That means that if we search for a word, we can find where it appears on a page, and by cropping the page to those coordinates we can create an image of an individual word. By combining these images we can create scissors and paste style messages!

This is a variation of the 'scissors & paste' notebook that extracts words from Trove newspaper images and compiles them into messages. In this notebook, you can harvest multiple versions of a list of words and compile them all into one big image.

There is also an alphabetical list of newspaper titles, showing approximately when they first appeared in Trove.

Using the notebook above, images of the front covers of Australian Women's Weekly issues on Trove were downloaded. Harvest details:

CSV file containing a list of digitised newspapers in Trove with articles published after 1954 (the copyright cliff of death).

There are a number of different ways to use these notebooks. Binder is quickest and easiest, but it doesn't save your data. I've listed a number of options below from easiest to most complicated (requiring more technical knowledge). See the running Jupyter notebooks page for more details and additional options.

Click on the button above to launch the notebooks in this repository using the Binder service (it might take a little while to load). This is a free service, but note that sessions will close if you stop using the notebooks, and no data will be saved. Make sure you download any changed notebooks or harvested data that you want to save.

Reclaim Cloud is a paid hosting service, aimed particularly at supported digital scholarship in the humanities. Unlike Binder, the environments you create on Reclaim Cloud will save your data – even if you switch them off! To run this repository on Reclaim Cloud for the first time:

You can use Docker to run a pre-built computing environment on your own computer. It will set up everything you need to run the notebooks in this repository. This is free, but requires more technical knowledge – you'll have to install Docker on your computer, and be able to use the command line.